Never thought I will be baking my cakes and cupcakes with veggies. After the I made the zucchini cake, went ahead with trying out this Beets cupcake which is eggless, butter-less and has beets puree. I baked the cupcake, but was really worried if my connissuers (my kids 🙂 ) will even taste it as they have a great aversion for beets. I just did not mention to them about the beets puree in the cupcake till they took the first bite. They gave me a thumbs up and said seems like you had to add a lot of food color to get the lovely deep color. That was the moment I could not resist and had to blurt out the secret about adding Beets puree 🙂 :). Well, that didn’t change anything, all the cupcakes were devoured with joy! 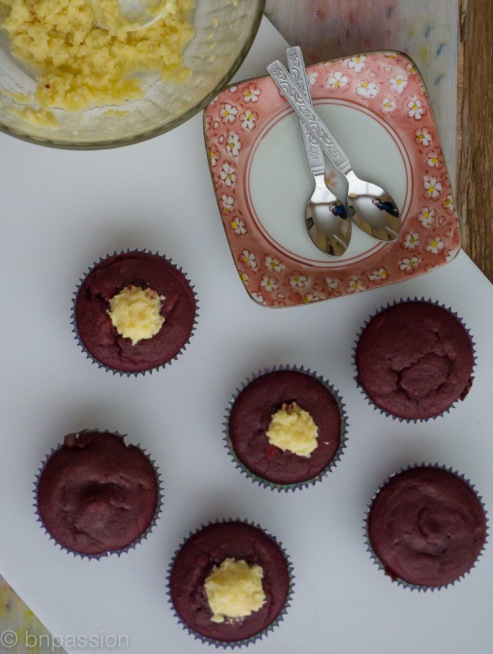 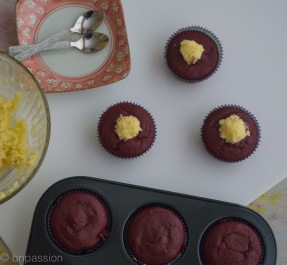 for cupcake
Preheat oven to 350 deg Fahreheit.
Place the cupcake liners in the cupcake tray.
Sift together flour, cocoa powder, salt, and baking powder.
In a big bowl, mix the beet puree and oil until incorporated.
Stir in the sugar and vanilla extract.
Add the flour mixture and milk alternately, until incorporated into the batter.
Fill the cupcake liners 3/4 full, and bake for 15-20 minutes (for mini cupcakes) and 25 minutes (for regular sized cupcakes) or until a toothpick comes out clean when poked in the middle.
Let the cupcakes cool completely on a wire rack.

for filling
Whip the butter, vanilla extract and sugar till nice and smooth.
Mix in ricotta cheese and stir till everything is incorporated.
Transfer the filling mixture into a piping bag.
Take a paring knife to remove a cone shaped section till the middle of the cupcake. Note: don’t scoop till the bottom of the cake
Pipe the filling into the hole and serve!
Note:Keep the cupcakes in the fridge and let sit at room temp at least 30 minutes before serving.